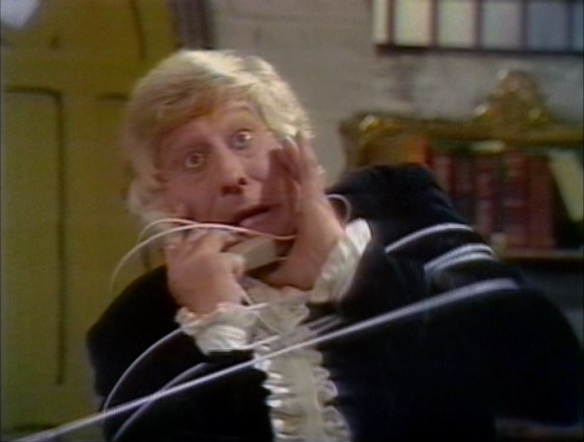 For the first time in its history, Doctor Who has a status quo other than “madman (and companion[s]) in a box”, and it’s great. It took a while to get there, but with the final tweaks made in this serial, it’s finally been fully established. And it’s largely thanks to the sheer size of the core cast.

It really is a family UNIT now, with the same amount of recurring characters as your average sitcom family. Mike Yates hasn’t done much that isn’t functional yet, but one more non-generic soldier gives us more to cling on to. Jo Grant, on the other hand, makes an absolutely sensational debut. It’s hard to disagree with the Brigadier’s assessment that the Doctor just needs “someone to hand you test tubes and tell you how brilliant you are”, and she does that with aplomb. She’s straight into the thick of it too, being hypnotised into bombing UNIT and rescuing the Doctor from evil carnies within the first two episodes.

I was concerned that the thinking behind the change in companion would be a bit of a backwards step – following the super-intelligent Zoe and Liz, they wanted someone who was less of an equal to the Doctor, and I was worried that might lead to some manifestation of a sexist seventies stereotype. Not a bit of it – she’s not thick or ditzy, she’s just normal. A normal everyday woman who the Doctor inspires to do extraordinary things. It’s the first step in a lineage that goes right up to Rose, Amy and Clara.

But really, this serial is all about the introduction of The Master. Roger Delgado is superb right from the off, with the perfect mixture of charm and sinisterness. And they instantly nail his relationship with The Doctor – a high-stakes battle of wits with undertones of begrudging respect and an uneasy affection. It’s a template that’s remained unchanged ever since. The Master is always the equal and opposite of whichever incarnation of The Doctor he faces, and these two seem to have an amazing chemistry already.

It’s interesting that once again the Autons/Nestene are used as a means of introducing a new character, and as with Spearhead and Rose are really only the side-show to the main story. I guess they work in this role because they can be anything they’re needed to be. Here, they certainly benefit from manifesting as more than just shop dummies – the troll dolls, daffodils and creepy life-sized doll things are particularly effective.

So many memorable moments in this story, such as the reveal of the Auton policeman, the Doctor’s stupid face when he’s being strangled with a telephone wire, The Doctor and The Master briefly working together at the last minute, and the particularly cruel method The Master used to escape from UNIT at the end. My favourite stand-out moment, though, was the weird Time Lord floating around in the sky, all dressed up like a little city gent.Wonderfully stupid.

And when The Doctor reacts to The Master’s name by exclaiming “that jackanapes”, I had to press pause because I was laughing so much. There seemed to be an extra level of flair within the dialogue throughout, with The Master also described as an “unimaginative plodder” and Jo, brilliantly, as a “ham fisted bun vendor”. Now I most definitely get why Robert Holmes has a reputation as one of the best writers the show had, while Barry Letts and Terrence Dicks are taking the show into a brilliant direction. Long may it continue.