This is most likely to be Mark Gatiss’s last Who script, and while none of his episodes were exceptionally brilliant, only very rarely have they been particularly bad. This final offering is much the same: consistently entertaining without being spectacular. However, it’s sort of pleasingly ordinary after the big concepts and high stakes of late, and the simplicity of the story works to its advantage in the context of the series.

In fact, it’s very old school, not just because of the returning foe. Victorian soldiers and Empire enthusiasts seem to be a very Classic Who thing, and more than most modern episodes it fitted the pattern of an old four-parter condensed into 45 minutes. The power struggle with in the human ranks is the most obvious example, along with our heroes getting imprisoned just as things start getting interesting.

Catchlove is a good old-fashioned Doctor Who shitbag, one of those characters who’s somehow more villainous than the monsters he’s up against. Gatiss does more with the Ice Warriors here than he managed at the previous attempt, with the first female of the species we’ve ever met providing an extra dimension. As you know, I’m always fond of situations where there’s good and bad on both sides, and the fact that both Godsacre and Friday are willing to switch allegiances in the end makes this far more interesting than a simple battle between good humanoids and bad monsters.

It’s only a shame that the peace that breaks out in the climax sort just… happens. It’s all very exciting, but the logic that changes the Empress’s mind requires a few little leaps. It’s also one of those where the Doctor doesn’t actually do much – he’s a bystander in the resolution, and there’s not much that would have transpired differently had he never shown up in the first place. Maybe that’s for the best though – considering one of the few things he does is create the message that made him come to Mars in the first place, the whole thing is built on a bootstrap paradox that could have destroyed the universe had he become more involved.

Elsewhere, Nardole gets sent packing very early on, and sits the vast majority of the episode out. It makes me wonder whether the story was initially planned without him, which is something that sometimes happened with “additional” companions in the old days. It’s a shame the team was incomplete when they’ve only got a short amount of time left together, but the Missy arc that Nardole moves on continues to be intriguing and pleasingly ambiguous.

The best thing about the episode though? Bloody Alpha Centauri! One of those moments that I’ll always remember experiencing the first time. When the Doctor started talking the Ice Warriors expanding into new horizons, I recognised it as a little nod to the Peladon stories and thought that was that. Then that voice! The same voice! I laughed and applauded, and then had to explain to my partner what the fuck had just happened and why I was suddenly so happy. Completely incomprehensible to the vast, vast majority of Saturday night BBC One viewers (and I’d have been in that bracket were it not for this project), but I just love the audacity of doing it and getting away with it.

And furthermore, if the analogy from the original Peladon story still stands, then the Doctor encouraging the Ice Warriors to join the Galactic Federation as a means of gaining support and achieving greatness is incredibly relevant to current times. This is another thing that proves the Ice Warriors are far more civilised than the British.

Ever since my extremely positive reaction to The Curse of Peladon, I was aware that the sequel is widely considered to be a poor relation of the original. In fact, while I was still watching it a few months ago, a friend asked “is that the good one or the shit one?” But when it comes to the more unpopular serials from the classic era, my opinion rarely seems to match that of the average fan, and this is no exception.

It was reminiscent of the twist in the middle of The Ark, with The Doctor returning to a civilisation that he’s saved, only to find that everything’s much worse than when he left it. I’m always a fan of that particular time travel trope, and with the reused sets and costumes, it felt like we were straight back into the thick of it, with very little messing around. The characters were very similar, but a generation on – the well-meaning but ineffectual monarch, with the bloodthirsty evil priest as their counsel.

Alpha Centauri was also a welcome returnee, although I found him slightly more annoying this time round – it’s partly the voice, but also his knack of getting himself into trouble too often, and then instantly blabbing about The Doctor’s plans. The majority of the guest cast were superb, though – I really took to Gebek, and Eckersley made a great villain, despite his slightly silly name. But the real stars of the show were obviously the Ice Warriors.

So effective was their use as peacemakers in Curse that I genuinely had no idea which side they’d be on when they turned up this time round. In the end, I’m glad they’ve defaulted to their evil ways – they’re proper vicious bullies here, the ruthless bastards we were promised way back in their first appearance. They completely change the story as soon as they turn up, causing the miners and the nobles to forget their differences and join forces against the common enemy. It’s the kind of impact from a mid-story arrival that you’d normally associate with the Daleks or The Master – I didn’t know the Ice Warriors had it in them.

On top of all that, it’s a story with a real heart, and plenty of touching moments during the various times that Sarah thought The Doctor was dead. The way things have panned out since the start of this season, I’m not completely on board with Three/Sarah Jane as a pairing – he’s often condescending and slightly mean to her, and it’s done without much real affection – but Elisabeth Sladen is still absolutely shining through regardless. I’m looking forward to seeing her team up with Mad Uncle Tom, which is only a week away.

I really am failing to see why anyone could be particularly opposed to this story. There were a handful of dodgy moments – like the climactic fight at the end of Part 4, between Ettis and some random bloke in a grey wig – but nothing major. But really, I was always going to be on board with a story that contains a huge pro-feminism speech in the middle, and a parable of 1970s miners’ strikes that sympathises almost entirely with the working masses, and shows the Tory analogues as relentlessly evil. This show is force for good, and so are the people behind the scenes.

Oh, and there was plenty of foreshadowing going on here too – Letts and Dicks are masters of the art. I’ve not seen Planet of the Spiders in full, but I have seen the regeneration scene, so the echoes of the Third Doctor’s last words were not lost on me. Here’s hoping it’s a great send off for a great Doctor. 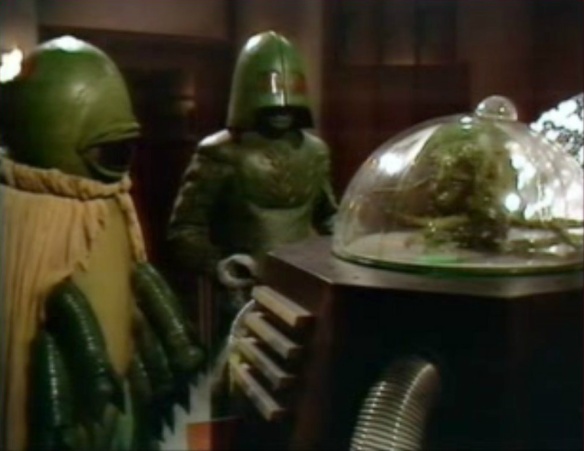 Where did that come from? Out of nowhere, having not anticipated anything particularly special, this was one of my favourite serials in a long time. I think the element of surprise is a huge factor – it’s so far removed from the rest of Pertwee’s tenure so far that the Brig et al don’t even get so much as a cameo. Suddenly the TARDIS is fine again (or seemingly so, before a bit of Time Lord-shaped handwaving at the end), and the Third Doctor and Jo are happily swanning around in an alien setting like it’s an everyday thing. Such a great, affectionate dynamic between these two.

It was all about confounding expectations, this story, not least when it comes to the Ice Warriors. It was a bold move to turn previously ruthless killing machines into reformed good guys, and I spent the whole serial expecting it to be a bluff, but no. The expectation of a twist that doesn’t come is sometimes better than an actual twist. The murder-mystery-esque aspect of this was particularly enjoyable – a proper whodunnit to almost rival The Web of Fear.

The success hinges on the quality of the Federation delegates. Unlike the interchangeable ragtag posse from The Daleks’ Master Plan, this lot all had memorable designs and distinctive personalities, with the morally ambiguous Ice Warriors joined by motorised shrunken head Arcturus, and the squeaky-voiced penis-shaped coward Alpha Centauri. It’s a shame that they’re all the same colour, but that’s what you expect from an all-powerful political alliance.

The humanoid Peladonians were all good too, especially the evil priest, here playing the role of what would now be a UKIP supporter in the surprisingly understated EU allegory. Troughton Junior is also good as the slightly wet king, but the star of the show is undoubtedly Jo Grant, or Princess Josephine as she’s known here. The running subplot of her relationship with Peladon (the king who inexplicably shares his name with his planet) could so easily have been an unwelcome distraction, but Manning is such a fine actress, and Jo such a strong character, that it ends up becoming a highlight.

Never more so than in that final scene, where Jo has to make a heart-breaking decision about whether or not to stay behind. This whole serial could so easily have been leading up to her departure – all the signs were there for a classic marrying-a-bloke-you’ve-just-met exit, and there was a definite sense that she’d come of age by being so capable and useful on what was only her second TARDIS trip.

But I’m very glad she’s staying – she’s already one of the best companions ever, and there’s so much more still to come.

This is a document of one fan's ongoing mission to watch every episode ever of Doctor Who - plus all the specials and spin-offs - in order, one day at a time. More info.