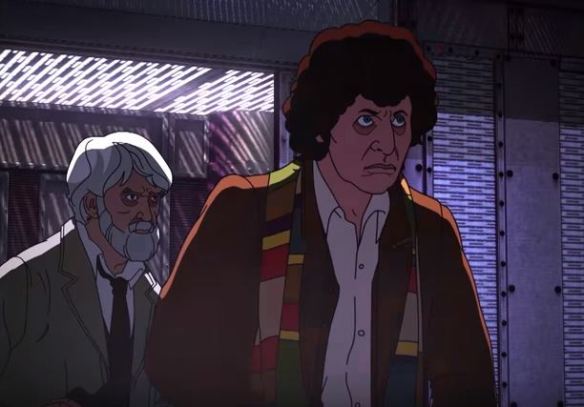 When the rumours about this release started circulating, I wasn’t convinced that the world really needed another version of Shada. Then when the details started coming out about what it actually involved, and how ambitious it was, I decided quite quickly that yes, we did need this after all. Suddenly the pictures I’d seen on Facebook of Mike Tucker and Peter Tyler dressed in seventies clothing made a lot more sense.

I was surprised to discover that, unlike the previous attempts, the story is presented as one big two-and-a-bit-hours special, and not in its original six parts. With the opening Think Tank scene moved to before the titles, it’s clear that a decision has been taken to convert the original footage into a modern production, rather than a simple recreation of how it would have been presented in 1979. This is fair enough – I don’t mind deviations from historical accuracy if historical accuracy isn’t the main aim – but it was a little annoying for me, as I’d anticipated spacing this out over the course of six days.

I didn’t have time to watch it in one go during the working week, and I was buggered if I was going to lose five of my seven remaining viewing sessions at this stage, so I ended up consulting an episode guide and hitting pause whenever I reached what would have been the end of a part. It wasn’t too bad, the only issue being that some of the cliffhangers didn’t quite work in this format, with footage from either side of the break having been smushed together to form continuous scenes.

Despite this, this is by far the easiest version of the story to follow, and the most likely to engross. Regardless of the modern format, the attempts to make the material as consistent as possible really pay off. The music sounds like it could have been recorded in the 70s, in sharp contrast to the 90s VHS version, and the model shots are absolutely spot on. The location filming looks lovely on Bluray, and the animation is great – it’s a curious mix of 2D and 3D, which took me a few scenes to get used to, but it came into its own in the various spaceship locations, which were very impressive indeed.

Thanks to all of this effort, it’s far less jarring than you’d expect when they cut between old footage, new footage and animation. Well, the Doctor’s voice does noticeably age by a few decades every now and then, but that can’t be helped, and all the voice performances are pretty good regardless. The only shame is that they didn’t take the opportunity to get John Leeson in to dub over the shit K-9, but you can’t have everything.

The ending is of course absolutely lovely. I’m not convinced that it makes complete sense, but I don’t really care. This production is a labour of love, by the fans for the fans, and while an octogenarian Tom Baker, in his actual costume in the actual TARDIS, grinning like a loon down the camera might be an odd way to end a proper episode, it feels perfectly apt for this.

One episode to go. One day to go. Crikey.