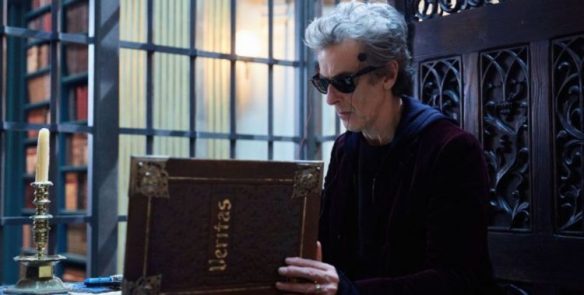 Insert standard moan about having to review what is clearly the first of a multi-part story here. The Monk Trilogy was initially billed as a three-parter, before being revised to merely a series of “loosely connected” individual stories, but you could even argue that this is the second of a four-parter, given how the events of Oxygen cast such a huge shadow, and the presence of a rare “previously” montage at the start of Extremis. Nevertheless, this episode does at least stand alone from a narrative perspective – kind of like Utopia back in the day – and is in effect a preview of the main Monk story still to come, which is pretty meta considering the nature of the eventual big reveal.

It’s certainly an unusual episode in the sense that nothing actually happens. Not in the pejorative way that could be levelled at certain stories over the years, but on the quite literal level that the only real life, real time events that transpire are that the Doctor receives an email and then tells Bill to go on the pull. It was certainly a bold move to reveal at the end that the preceding 40-odd minutes wasn’t real, but there’s little of the disappointment that you often get with “it was all a dream” endings, because what took place was still important and relevant to the ongoing series arc, and thus worth your emotional investment regardless.

It helps that it’s really bloody good, of course, largely thanks to the quality of performances from all three leads, and a suitably mind-bending Moffat plot. It was another bold move to have the actual current Pope as a guest character, but I suppose the “it wasn’t real” defence mitigates any potential to offend, and even if not, it’d still be worth it for the brilliant gag of him gatecrashing Bill’s date. It’s only a shame that the dead President we see later on isn’t Trump.

(Typing that, it’s just occurred to me how weird it is that my watch-through has brought me to a series that was broadcast during the current administration, considering we were only just into Obama’s second term when I started, and the prospect of that gobshite even considering running for nomination was but a distant nightmare.)

Anyway, as well as the stuff that didn’t actually happen, there was also some stuff that did happen but in the past, with the Doctor is forced to execute Missy in a ceremony overseen by Max from Humans. It was barely a surprise at all that Missy was the one inside the vault, but it’s nice to fill in Nardole’s backstory, and clarify exactly what his relationship with the Doctor is. This new information seems to be the catalyst for Nardole taking a level in badass; with the series now halfway through, he’s becoming far more than just the comic relief, and starting to hint at more nuance and complexity than we’ve previously given him credit for.

Just how long has the Doctor been guarding that vault, though? He vowed to do so for a thousand years, but we don’t know exactly when those flashback scenes took place – it could have been a few weeks ago for all we know. Or has it been so long that the university was built around the vault? How long can Nardole live for? I genuinely can’t remember whether or not the rest of the series answers these questions!