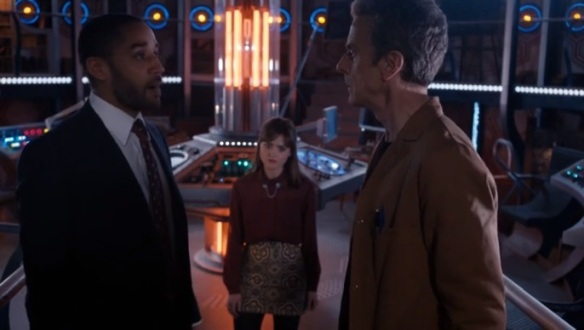 It’s fairly rare these days for the Doctor to spend a prolonged period of time on contemporary Earth. More often than not, it comes about because he has no choice but to stay in one place, and it usually falls to Gareth Roberts to write it. Like the recent James Cordon-based diversions, this episode is a cheap and cheerful change of pace, but it differs in that it focuses on driving the over-arching stories of the series forward, rather than taking a break from them.

This is the most soapy the show has ever been, and that’s not a criticism; there’s a reason soaps are the most popular dramas on TV, and there’s no reason why Doctor Who shouldn’t aim to have characters who you care enough about to be invested in their personal lives. I guess the crux of this episode is whether you consider Clara to be at that level; I remember not quite being there with her when this went out, but I am now, and so I welcomed the chance to learn more about her in a less-hectic-than-usual episode.

Danny Pink, on the other hand, is a complete knobhead. I can’t help but agree with the Doctor that Clara has “made a boyfriend error”. It’s not that he’s necessarily in the wrong – it’s natural that he’d be suspicious of the Doctor, and keen to protect Clara, and he does have a point about the Doctor being like a military officer. But considering that we barely know him, who does he think he is, coming round here calling our hero a prick? Putting him in direct opposition to the best character in the history of television doesn’t help us to like him.

The bigger issue, though, is how he is with Clara when they’re in private. He’s controlling, demanding and manipulative, asserting his patriarchal dominance and using emotional blackmail to get his own way. He makes her promise to never hide anything from him, as he believes that being her boyfriend entitles him to control her life, and threatens to leave her if she doesn’t comply. He’s not good enough for her – not because he’s an ex-soldier, or because he resembles a P.E teacher, just because he’s a bit of a shit.

Still, I’ve found that I’m able to look past my dislike of Danny Pink more often than not during this rewatch. Perhaps it’s because I’m looking forward to seeing him die fairly soon. Putting him to one side, there was plenty to enjoy here, with Capaldi on great form as usual, and given a fair amount of comedy to do. I loved his assumption that Clara’s boyfriend would be the one who looks vaguely like Matt Smith, and how pleased with himself it made him. Plus Chris Addison has turned up now, raising the prospect of a Malcolm/Ollie reunion.