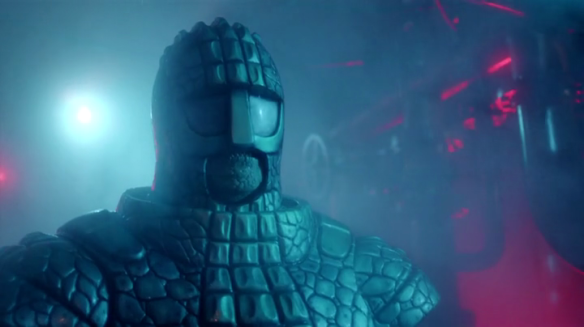 We find ourselves on a Soviet nuclear submarine staffed by several very famous actors, many of whom are off of Game of Thrones. It was back to the good old days of incredibly plummy foreigners, which gave this a very old-school vibe, along with the base-under-siege set-up and the lovely model work courtesy of Mike Tucker. And, of course, the returning monster.

I have a soft spot for the Ice Warriors, thanks largely to my unusually high regard for both Peladon stories, and so I was happy to see them back. And it wasn’t just any old Ice Warrior, but a famous Ice Warrior – it was a nice touch to have the Doctor know who this specific guy is, as it helps you to think of him as an individual character, capable of being as well-rounded as any human, rather than just a generic monster. Skaldak was seriously imposing and formidable, but also smart and cunning.

Those early scenes really worked, but I was baffled by the decision to take him out of his shell-suit, when all they showed of the monster inside was a pair of claws dangling from the ceiling, and a shapeless form whizzing past in a blur. A few glimpses of generic alien appendages isn’t as scary as an armoured beefcake with built-in guns; it felt like such a wasted opportunity to bring a classic monster back and then change it into something completely different after such a short amount of screen time.

Having it return to the armour but remove the visor was a reasonable compromise, but it affected the impact of those closing scenes. The face looks like what it is – a special effect – drawing attention to the fact that it’s artificial, in a way a big helmet doesn’t. To be fair, the climax may well have fallen flat anyway, given that the Doctor’s big plan is to establish a scenario of mutually assured destruction. I’m not sure the lesson we’re supposed to take from the Cold War is that this was a sensible tactic. In the end, the Ice Warriors show up and fix everything anyway, rendering all of this irrelevant. Ho hum.

Clara annoyed me a little in this episode, and I think I’ve figured out why. It’s the way she’s so cocky when volunteering to negotiate with Skaldak, and the way she seeks validation afterwards, asking the Doctor how she did. This self-centred keenness is at odds with her being so new to all this, and it makes it seem like it’s all a lark to her, like she’s not taking it seriously. Later on, her character would be fleshed out, and these danger-seeking instincts would be thoroughly examined, and shown to have consequences. But we know so little about her at this stage that all we’re seeing is her flaws, and it’s hard to take to her.

But still. I did enjoy this one more than most this series, and it was a more than enjoyable way to spend forty-five minutes, unlike yesterday. It’s just that there have been fundamental problems with the Doctor-companion dynamics in both halves of this series, which are stopping good episodes becoming great, and this in turn is emphasising flaws that would otherwise matter less.