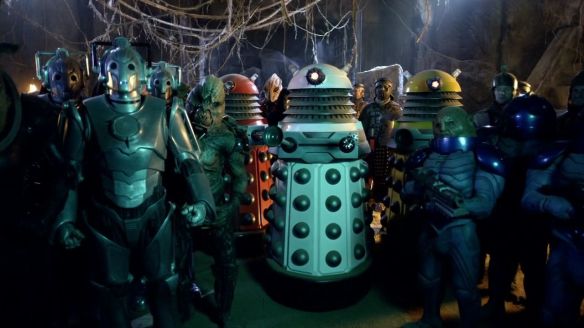 * That’s a hell of an opening sequence, bringing together pretty much every major guest character from the series so far. Well, almost – if you were James Cordon or Meera Syal, you’d have to take it personally. It’s a new twist on the way the finale sits with the rest of the series – as well as there being seeds of the finale dotted throughout the preceeding episodes, bits of preceeding episodes are dotted throughout the finale. It makes the whole thing feel like it’s all been one big story – Series 5 is one long and varied chapter in The Doctor’s life, rather than several smaller ones.

* River Song Timeline Watch: The Weeping Angels story hasn’t happened to River yet. Is the implication that we’re following River’s story in exact reverse chronological order? That would be the easiest interpretation to follow, but hold on – she doesn’t seem to know who Rory is, so this can’t take place after any of her Series 6 or 7 stories. Unless she’s just pretending to not know Rory, in order to avoid any spoiler-related faux pas. Oh, I’m only three River stories in and I’ve gone cross-eyed.

* I really like the way the Cybermen are used here, like creatures in a horror flick. There’s the disembodied head scuttling about on spidery tentacles, then the skull falling out of the helmet, then the headless ghost coming to attack. Despite how unusual a Cyberman appearance this is, it’s the most effective they’ve been in the revival so far, and the skull is the closest they’ll come to nailing the body horror until they give up and bring back the Mondasians.

* Rory’s back. Hooray! I couldn’t quite remember all the details of how it happens, and considered the possibility that he’d remain an Auton for the rest of his life. That would have been great – The Doctor having a companion that’s ostensibly human in pretty much all respects, except that his hand can turn into a gun. And he might accidentally kill his wife when stressed.

* Quick status check at the end of the first part: The Doctor has been imprisoned by every monster he’s ever met, Amy has been reunited with Rory only for him to shoot her dead, River is trapped in an exploding TARDIS, and every star in every universe in every reality is going out, one-by-one. Yeah, that’s a pretty high-stakes cliffhanger.

* When things are this extreme, it makes me nervous, as it’s a big challenge to get out of situations like this in a satisfying way. Moffat handles this by once again tinkering with the format of a finale. It’s often the case that the first ep is largely one long set-up for the second ep, but here it feels more like two distinct stories. By not starting The Big Bang in the same time and place as The Pandorica Opens ended, it’s an indication that the answer to “how do they get out of that one?” is going to take the whole episode.

* It’s an answer that involves the return of young Amelia Pond, and she’s up against stone Daleks, which look a hell of a lot better than the New Paradigm bastards elsewhere in this series. We’re also introduced to The Doctor’s penchant for a fez, as part of a timey-wimey jigsaw puzzle of a plot, which sees the show once more channeling Bill & Ted-style time travel humour. This use of time travel as a story-telling device is something that would become a trademark of Moffat’s era, so it’s easy to forget how fresh, unusual and exciting it felt at the time.

* Inevitably, the ultimate conclusion to the story requires a little bit of what people like to refer to as a “reset button”, but there’s so much more it than that, and it avoids all the pitfalls that often make this term a pejorative one. Firstly, the show acknowledges exactly what it is – The Doctor is rebooting the universe, simple as that. Secondly, it’s not without its cost – The Doctor has to sacrifice his existence in order to make it happen, cleverly linking up with the rest of the series once more as he goes.

But mostly, the crucial part is that by the time everything’s worked itself out, the characters still remember everything that happened. Amy piecing everything together was a thing of joy, and it meant that all the things that the reboot erased were still “real” to her, Rory, River and The Doctor, even if that’s not what the history books will say. As far as they’re concerned, Rory spent the best part of 2,000 years guarding Amy, while she managed to bring both the men in her life back from the dead, and all the character development that goes along with these things will still apply.

So yeah, call it a “reset button” if you like, but it’s not a cheat – it’s our heroes fixing a problem and winning the day like they always do, even if nobody but them will know they did it.

What a fine series that was. One thing I’ve noticed is that when I was rewatching Series 1-4, seeing Eccleston and Tennant was like revisiting old friends, as I had been for Doctors 1-8. But with Smith, despite the fact that I adore Capaldi, I’ve been kind of forgetting that he’s not the current Doctor – he’s still so exciting to watch, and I’ve always thought he could have easily stuck around for longer.

Coming up next, I’m about to go on holiday for a week and a bit, which might rather dent my hopes of finishing this thing before Christmas. However, I’m taking my laptop and my Sarah Jane DVDs with me, just in case it rains…