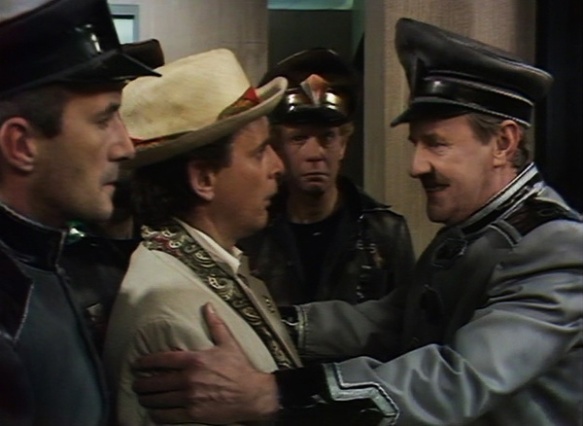 It’s strange to think that I’m over half way through this season already, and a sixth of the way through McCoy’s era. I’ve heard that it gets significantly better as time goes on, which is good, because it’s been distinctly average so far.

Sylvester himself is good, rapidly becoming very good; dropping the weird speech patterns means he’s already improved since his debut. This serial gave him lots of innately Doctorish things to do, such as using the rulebook against the guards, and fixing a society by getting everyone together for a big chat. He’s a lot of fun to be around, and he’s got the unpredictability that we haven’t had since Tom. Well, Colin was unpredictable too, but rarely in a good way.

It was quite an intriguing world that was set up, and pretty quickly too. It’s always a good sign when there’s this much detail poured in to a scenario that only needs to sustain four episodes. The Kangs are daft, but fun. I liked their names and “build high for happiness”, but some of their slang felt a little unnatural when delivered by stage school actresses pretending to be common. Their playground mentality was entertaining at first, but grated a bit as time wore on.

The old biddies were a highlight though, despite being constantly distracted whenever they were on screen by my trying to remember where I know them from. Turns out it’s loads of things. A great move to turn the comic relief into secondary villains, and the way they went for Mel with a pitchfork and a crochet blanket was brilliantly vicious. I couldn’t quite tell if they wanted to kidnap her for company, or if they were planning on eating her. As it’s Bonnie Langford, the latter is preferable.

Then there’s the caretakers, lead by Richard Briers, who’s clearly having an absolutely lovely time. I have a strange fondness for an outrageously pantomime-ish baddy, but the snag is that previously it’s been juxtaposed against a serious backdrop and decent production values, both of which are long since missing in action. By the time he’d turned into The Great Architect, he was just taking the piss a little bit.

The Cleaners were a funny one. It took me a while to figure out what they reminded me of, until I realised it was a slimmer version of the War Machines. They came across as pretty formidable, although the wide shots of them trundling along with a big dustbin in tow made them look daft. A similarly mixed bag was Pex. I felt for him when the Kangs were being mean, but his path to redemption via a heroic sacrifice is so well-trodden that every single beat was entirely predictable, and the funeral scene was terribly mawkish.

That’s the theme of this story – pretty good, enjoyable in patches, but undermined by silliness and ultimately slightly annoying. The main thing I’ll remember though is that it’s incredibly high-pitched. The theme tune, the incidental music, the Kangs and Bonnie Langford. The show is hurting my ears at the moment.