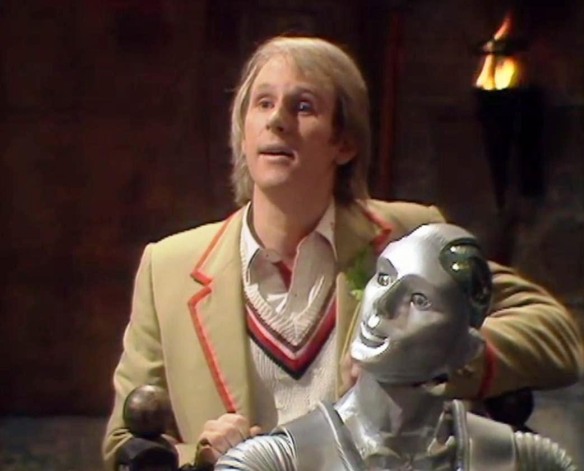 I was fully expecting this to be utter dogshit, due to its low placing in the last massive DWM poll, and the fact that this season routinely oscillates between brilliance and garbage. So, as I’ve said countless times before, I’m not sure whether my response is a reaction to that, but I found it to be perfectly fine, even teetering towards being actively good.

I also knew that this was a Master story, but even without that knowledge, you know it’s him right from the start. Just from the tiny glimpse from behind before he puts his mask on at the joust, I wrote in my notes: “is that Anthony Ainley in a ginger wig?”. Despite the accompanying Radio Times trickery, it’s got to be intentionally obvious, hasn’t it? The big sword fight is positively improved with the realisation that it’s The Doctor vs The Master; it’s Pertwee vs Delgado all over again.

The criticism that his scheme is both daft and too piffling for The Master is probably fair enough, although it didn’t really bother me. Well, that is until afterwards, when I read someone point out that it fits much more closely with the modus operandi of a different renegade Time Lord. If you’re going to bring back old villains every week, then man, this should totally have been The Monk.

But still, Davison and Ainley have developed into a great adversarial double act. The Master is always a reflection of the particular Doctor he’s up against; not only does Ainley match Davison’s recent penchant for more minimalist nonchalance here, but the pair seem to have gained confidence in their roles at the same rate.

Gerald Flood’s depiction of King John is arguably the highlight though, even with his silly lute playing. This brings me on to the thorny subject of Kamelion, who I know is already doomed to failure, and as such I won’t bother putting him in the header. It’s a shame it didn’t come off, because this serial – which would surely rank as the all-time weirdest way to introduce a companion, were it for the preceding trilogy – did enough to make me intrigued.

The possibilities are quite obviously endless, and there’s an interesting thread to be followed in the dichotomy of a sentient being voluntarily succumbing to the will of another, regardless of their intention. Couldn’t they just have shot the prop from a distance at the start of each serial, and have him instantly morph into some plot-relevant guest character?

But like I say, this one’s perfectly fine, and it certainly doesn’t outstay its welcome. It’s not a season finale by any means, but perhaps that’s appropriate considering how weirdly inconsistent this season has been. They needed to end with the Daleks or something, so it wasn’t a surprise to read that this was the original intention; I’d always assumed that this season was a few episodes short due to them being allocated to The Five Doctors. But anyway…

Wow, over 600 episodes done! Things are definitely winding down; the spectacularly bumpy ride has resulted in the lowest average rating of the colour era so far, despite containing two serials that are now among my all time faves.

And now it’s over, I’ve concluded that the recurring-villains-every-serial thing didn’t really come off. I’m not sure if I’d have even clocked if it wasn’t so well documented. Three of the six serials are taken up by just the one baddy, and of the three remaining villains, one is only from the last season, and another shows up all the time anyway.

Oh well, the proper anniversary celebration is still to come. See you tomorrow.