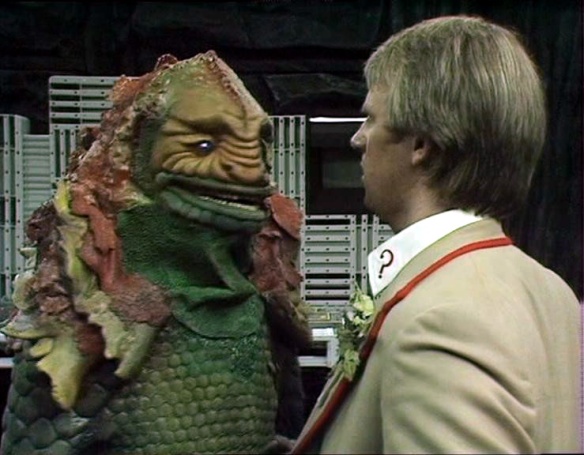 The problem with starting a serial with scenes starring Fred Elliott, is that you expect Fred Elliott to be in it throughout. Therefore, The Visitation was fighting a losing battle from the second the TARDIS crew turned up at the house and he wasn’t there. I can’t help but imagine the alternate universe where Fred Elliott is in place of Richard Mace.

But that’s not to say that this universe’s version is without its merits, chief amongst them being the aforementioned thespian. Such a warm and likeable performance that it’s a joy every time he encounters something mind-boggling, comes to terms with it and uses it to grow. A top-notch guest character.

Both the Terileptil and the Android were pretty decent, although neither of them seemed particularly original – it could quite easily have been a Sontaran story and little would have needed to change. I wasn’t sure about the design at first, but the animatronics worked well, and it was a joy to see the late great Peter Wragg’s name in the credits.

One thing you could always rely on Peter Wragg for was scenes of utter destruction, and the closing scenes set in London and shot on film looked amazing. The Doctor being responsible for the Great Fire of London is an obvious yet fundamentally Who-y idea, and it also provided a particularly grisly death for the aliens; bubbling away as they burnt to death.

The last episode made up somewhat for a very slow start. There wasn’t much plot development beyond one or more of our heroes being captured, escaping, then being captured again somewhere else. It got a bit repetitive after a while, and it was a frustrating wait for a real showdown between The Doctor and the baddies.

The exception to the above formula is Nyssa, who instead gets to spend the vast majority of the story keeping herself busy yet out of the way in the TARDIS. It’s great that her mission is successful and for her to have such a hand in saving the day, but honestly, I feel like I barely know her, other than that she’s clever and that she shares The Doctor’s compassion.

Overall I don’t think I like having this many companions – the necessity to share out the screen time is preventing much character development, and the only way they are changing is in a negative way. Tegan has to be increasingly whiny and petulant in order to create conflict, and Adric has to be increasingly thick to advance the plot. He once again blabs all The Doctor’s secrets to the baddy, and accidentally leads people straight to the TARDIS. Six episodes to go until he gets what’s coming to him.

And they killed the Sonic Screwdriver! There was no real need – he wasn’t using it all that much recently anyway – but I get the reasons why. I’m far more affected by the episode selection menu on the DVD using screenshots of the title cards from the Bernard Lodge days, rather than the current Sid Sutton titles. Idiots.