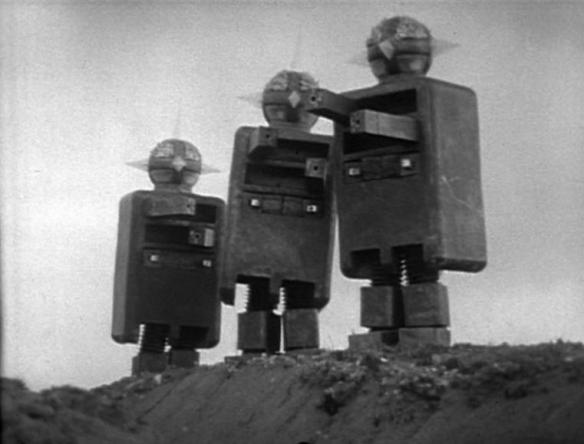 Do you feel the power of The Dominators? Do you have the will and the skill?

Sorry, that’s been in my head for five days. Anyway, I went into this one with extremely low expectations, as I’d spotted that in the latest Doctor Who Magazine poll, it was ranked one place below The Rings of Akhaten. And I can’t imagine how it’s even possible for an episode to be worse than The Rings of Akhaten.

Fortunately, this isn’t. It’s certainly not a standout, but considering that the Troughton era is almost entirely composed of all-time classics, that doesn’t necessarily mean it’s rubbish. There’s plenty of good stuff here – it’s pretty pacey, the location work looks great, and there’s some entertaining, if a little scenery-chewing, performances to keep you interested.

I really like the Quarks, the cute little buggers with their child-like voices and ability to fling people at walls. They’re not very good at actually killing, though – great when blowing up buildings (thanks to some impressive pyro work), but their aim is atrocious when they’re chasing a Scotsman and a fat bloke wrapped in a curtain.

The Dulcians being fanatical pacifists was a good concept, but it didn’t really go anywhere – it looked at one stage like the council were about to snap and take action following the murder of Brian Cant, but they never showed up in the end. Fortunately, the necessity for the youngsters to rebel in order to save themselves allowed Zoe to continue to kick arse, when she rallied them to stand up and fight. It’s so refreshing to have a companion who’s intelligent enough to talk to The Doctor at somewhere near his level, and also to have a young woman on board who’s equally as brave as the male companions.

Overall though, the implication that pacifism is an inherently bad thing, and that violence is a necessary feature of a civilised society, makes me a little uneasy. The Doctor always believes in peace, but the show’s authorial voice doesn’t always agree.

I found the power struggle and in-fighting between The Dominators much more interesting – they’re both ruthless in the pursuit of their goals, but the smarter one realises that it’s counter productive to be evil for the sake of it. It’s fitting that they were literally hoist with their own petard.

So Season 6 starts with a solid if unspectacular episode, but looking back on past season openers, that’s surprisingly common so far – Tomb being the only exception. I know for a fact that this season gets much better, having seen a couple of them before, but it’s also the last of its kind. The last in black and white, the last ridiculously long run, the last where there’s episodes missing, and unfortunately the last of the Troughtons. Not looking forward to that particular change, so while I’ll be excited when I enter a whole new era, I’ll be making the most of Season 6 while I wait.